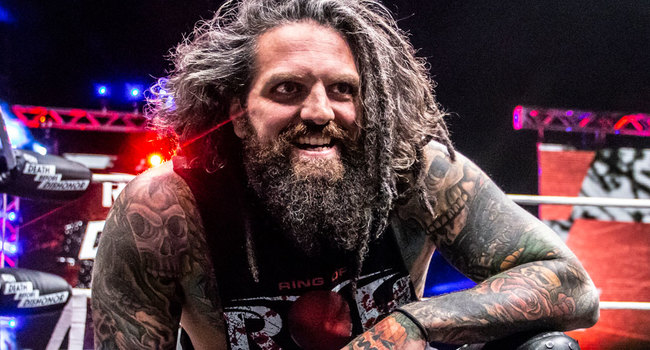 CHARACTER INFORMATION
Ruthless Heel
Gimmick: Lover of inflicting pain and a proverbial glutton for punishment, Ashley Voorhees is one of the more sadistic individuals in the pro wrestling circuit. His name and reputation among the independents in the Portland area caused him to be somewhat of a "urban legend" among his peers. His style of wrestling is more-so the shock, blood & guts and hardcore style, with his love for any weapon he can think to use and the rush he gets when he sees his opponent - or himself - dawning the crimson mask. Ashley, obviously a fan of old school horror movies, slasher icons (hence the last name) and anything involving shock and gore, stands out among his peers due to the fact he is not your average professional wrestler. He's not technically sound or much of a high rope risk taker, but his brutality makes his matches almost hard to watch due to how violent that can be; in fact, he was blacklisted from two promotions in the Portland area due to how violent his matches were.

MOTIVATIONS
The only motivation Ashley has is the sheer thrill he gets whenever his opponent(s) are being harmed. He's a sadist that enjoys pain more than sex at times, which causes him to throw caution to the wind when he gets really into it.
Tendency to Cheat: Sometimes.

- Ashley can become unhinged at any moment, especially when things aren't going his way. When this happens he will often lash out on his opponent and/or the referee, which can cause disqualifications.
- Ashley is very hard to put down for the count due to his high tolerance of pain, but he often gets in his own way (see: above).
- Ashley is a loner and has no real family or friends (that we know of). He doesn't associate with anyone but himself, and the select few he does associate with is unknown at this time.
Likes: Raylan, Rat_King18, Alex Blade and 1 other person

Hello, welcome to EAW! You will be sorted onto Saturday Night Showdown! The deadline for each show is the night before at 11:59 PM EST. If you have any questions or concerns, feel free to contact @Cameron Ella Ava. If you haven't joined the Discord yet, feel free to do so! Have fun and good luck!

Thank goodness hes on Showdown, I aint ready to deal with that type of terror....

Besides that really enjoying the character set up and hope you enjoy your new home away from home while at home
Beef of the Week
Visual Prophet vs. Gaines - MVE #166