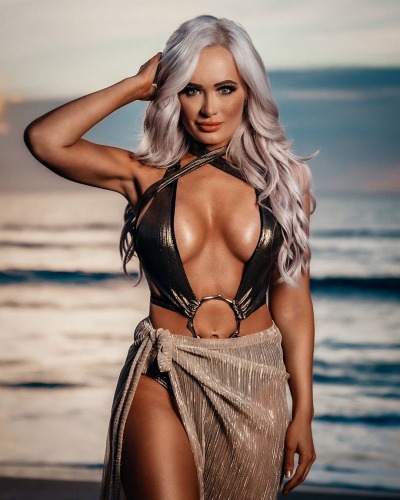 
Gimmick:​
Out of all the Ava sisters, Candice Blair is the most complex out of the four of them; however, it seems like she incorporates all of the traits from her older sisters well-known in EAW. She has Consuela's soft and compassionate side; she has Cameron's emotion on her sleeve and she has Camille's brash and arrogance. She is someone who is quite difficult to understand. She tries to do the best thing possible, but it may not seem like she's doing that. The more you get to know her, the more that she begins to loosen up and people begin to realize the type of person that she is and why she's the way she is. At the moment, Candice has no clue why she is the way she is, and it's something that she's constantly trying to figure out for herself. Much like Camille, once you find an ally in Candice, you find an ally for life. She will take a bullet for you. She will have your back. If you cross her, then, you're going to be terribly sorry that you ever did that.

*Gimmick will be updated as the season goes on. Constantly evolving.*


​
As the youngest member of one of the most important families in EAW, it should have been so easy for Candice to get signed in EAW. Instead, Candice wasn’t too fond of the lifestyle that EAW Developmental wanted for her. It almost felt like a full-time job -- she needed to be in New Jersey 4-5 days a week, she couldn’t be booked on other wrestling shows. Everything was so structured with EAW’s Developmental Territory. They controlled what she did in every waking moment. They decided on her daily routines and if she wanted to make anything changes to herself, they would need to approve it. In a way, it seemed like she was walking on broken eggshells. At the same time, she felt like she couldn’t get the “development” she needed in the Performance Center. At mid-2017, Ava requested her release from EAW. Her reason for her release was to go on an excursion.

Over the next three years, Ava traveled the world and gained as much experience in wrestling as possible. She wanted to prove that she wasn’t a pretty face (which may come in handling in modeling) or relying on her looks to advance her career. Sure, she’s aware that she’s gorgeous and marketable, but evolving as a wrestler was her main priority. She’s familiar with strong style wrestling from her time in Japan. She’s also traveled across the United States to make sure that she got the basic downs. It also helped that she had three other talented sisters who she is doing everything in her power to measure up too. Candice is aware of the big shoes that she needs to fill, but she’s confident that she’ll be able to do so.

In March, Ava departed from a wrestling promotion in Japan. Since June 2019, Ava has been everywhere around the world, building her name and credibility and proving that she never needed to be placed in Developmental and being one of the hottest unsigned wrestlers in the independent wrestling scene.

Notes for Writers:
🤍 Even though portrayed as a heel, Candice Blair always has a soft spot for her sisters (she’s the closest to Camille.). She can poke fun of them and them back to her, but if anyone insults and talks shits about them, she will get defensive and retaliate.

🤍 Candice can be described as having Camille's brash attitude and ability to shit talk; Consuela's nurturing attitude, and Cameron's ability to wear her heart on her sleeve.

🤍Candice is known for having a perky and bubbly attitude, which may have people believe that she’s unaware to the reality of any situation that she’s placed in, but she’s fully aware of how to utilize her attitude to either get in her opponent’s skin or catch them out of nowhere when she performs to an advanced level in the ring.

🤍Candice has dyed her hair in colors such as silver, white, blonde, pink or brunette. It just normally depends on her mood. She’s mostly known for the red hair, which she dyes it to pay tribute to Camille.

🤍 Candice has been five years sober after an intense battle with alcohol. The chances of you catching her drinking any alcohol are zero and instead, she’ll settle for a soda or strawberry lemonade.

🤍Candice doesn’t really like to shy away from fights and is aware of what she says could bite her in the ass. However, it’s a risk that she’s more than willing to take.

🤍Candice is an opportunist. Wherever she sees dollar signs and a way to further her wrestling or modeling career, is something that she’ll more than likely capitalize on.

🤍 Candice isn't tied to any brand (not until she signs a full-time contract. For now, she's Showdown.

). She is usually brought in as a last resort or someone that you know will deliver at the most amazing level possible.

🤍Jamie O’Hara is her favorite Elitist (even though he kinda doesn’t like her) but credits him as a big influence to helping her reignite her career in wrestling.

🤍Candice believes that she and Jamie O’Hara are best friends and will frequently text him and whatnot. Even if he finds her to be an annoying piece of shit, but Candice is never gonna go away. No matter how many times he knees her in the face. 😄
Last edited: Jul 3, 2020
Likes: Ryan Wilson, Archimedes J. Manson, Darcy May Morgan and 1 other person

See you on Voltage soon

Omg, welcome to EAW! I like your name, pic base and everything about you! You are going to do great here! I'm excited for your work! You can be on any brand you want, legend.

When are we creating a brand solely for Ava family members?

Charlie Marr said:
When are we creating a brand solely for Ava family members?
Click to expand...
That's a work in progress.

Waiting for the moment where a brother comes around wanting revenge on the family cuz he was put up for adoption and the sisters didn't know
Beef of the Week
Visual Prophet vs. Gaines - MVE #166

Click to expand...
I have a name for it: Empire.

Because this is what we needed, another Ava

Jamie O'Hara said:
Because this is what we needed, another Ava

Click to expand...
Would you rather see another Wilson?
Long live the Ava's!

Showdown is going for a ride... On the Wildside!​
Likes: Cameron Ella Ava

Ryan Wilson said:
I have a name for it: Empire.
Click to expand...
Solid name. 🤔

Jamie O'Hara said:
Because this is what we needed, another Ava

Click to expand...
I am so glad you are so encouraging of the family members I bring here. The more, the merrier, tbh.

Truth be told I'd love to have a real member of the Wilson Extended Universe and not just another NPC to add to my collection. Or actually have someone pick up Sylvain or Brujah. I'd love to see the take another player would spin on them. Anyone up to the challenge? lol.