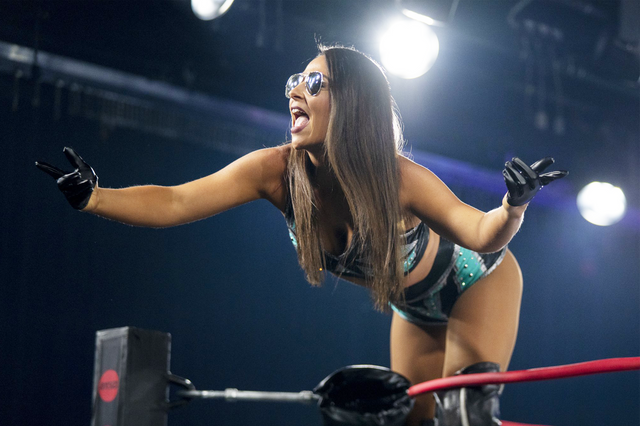 ​
✰ Disposition/Alignment: Tweener (2021 - Present)
✰ Tendency to Cheat: If Needed
✰ Gimmick: After a rough start to Season 14.. Darcy ended the year by reigning her briefcase against rival, Drake King and finally got her big win that she had wanted. The start of the season saw setback after setback for the Leading Lady, meaning that she was indeed humbled and her vulnerable side was fully shown to the world, a side not often seen by the EAW universe. Going from having almost everything at Pain for Pride to almost losing everything has changed Darcy for the better. She goes into 2021 looking to win the Universal Women’s Championship with the same sassy, dramatic and sarcastic attitude but this time.. She does it with one thing she has failed to show over the course of her career… heart. (UPDATED FOR 2021)

✰ First EAW Specialists Champion to retain the championship in the Specialists Chamber
✰ Undefeated in Tag Team Action as Valkyrie (6-0)
✰ Came 3rd in the Divide and Conquer Match at Territorial Invasion 2019
✰ Entered the Women's No Way Out Match at Fighting Spirit 2020.
✰ Second Female to win the Cash in the Vault Ladder Match at Pain for Pride.
✰ Main Evented Territorial Invasion 2020 with War Games.
✰ Retained the Cash in the Vault briefcase at Road to Redemption 2020.

✰ The Leading Lady character is all about confidence. Darcy at all times wants to be the hero or the centre of attention. It’s very theatrical and dramatic and always aims for a good story. Darcy has stated multiple times that changing to the Leading Lady, a person that no longer took others' opinions on board and focused about herself, was a decision that saved her life. After years of not doing it, wrestling finally made Darcy believe in herself. She was tired of dampening her sparkle so that others could shine brighter than her, something that she recognized when getting into wrestling.

✰ A lot of her taunts refer to showing off or being really into her looks. She will bow in the ring and pose as much as possible when all eyes on her and will confidently show off whatever she is wearing. She always wants to take the lead and be the star of the show because she believes she deserves that.

✰ Although treated like a diva in her career, Darcy is highly trained and skilled in the ring. After her breakdown with her former boyfriend who trained her, her parents' money went towards wrestling practice and training around the UK. Her style of wrestling can be explained as “british strong style” like Pete Dunne and Tyler Bate. Most of her moves involve hard strikes (knees, punches and kicks)

✰ Darcy has had previous issues with shoulder injuries in her wrestling career. This was seen in her match against Dr Bethany Blue at Grand Rampage when Darcy popped her shoulder back into place. However, do not believe that this puts her at a disadvantage. She has been given the nickname Super Darcy for a reason.

✰ After competing against @Drake King for the CITV briefcase at Road to Redemption 2020, Darcy has Drake’s initials "DK" burnt onto her left shoulder after Drake used a branding iron on her during the match.

✰ Darcy previously cheated a lot during matches, but after getting loss after loss at the beginning of Season 14, Darcy looks to have more legitimate wins under her belt without cheating. However that doesn’t mean she won’t do it if it is needed in desperate situations.

✰ Darcy is always followed around by a team, whether that is a personal assistant or security guards. One of the main supporting characters in her scenes is Wallace, who is her head bodyguard. He is with her at all times backstage but not at ringside.

Welcom to your home away from home
Beef of the Week
Visual Prophet vs. Gaines - MVE #166

Hello welcome to EAW, you'll be sorted to Empire for the remainder of the season so contact @Amber Keys or @Cameron Ella Ava if you have any questions. Since the card is already posted, you'll be debuting on Fight Grid next week where you'll be taking on @Io_Ishimori. Good luck.

Late to the party, but welcome.

Noah Reigner said:
Late to the party, but welcome.