Team Gimmick: Since becoming the Empire Tag Team Champions back at Terminus a season ago, the duo of Minerva and Constance Blevins, better known through all circles by now as Heavenly Hell, have been able to remain undefeated as the challenges and odds have continued to be stacked up. In between this period they were able to go on and win in theirt Pain For Pride debut by defeating the three best tag teams at the time to win the Unified Tag Team Championships.

But it's not been enough, it would appear. Ever since Empire closed its doors, the talent from that brand were dispersed and migrated across the remaining three brands that consisted of all the male talent. Being champions, they felt it would only be a matter of time before they would start to be appreciated for their hard work and every bit that they've clawed and scratched for. But slowly over time they've both come to realize that they were going to have to do more since everyone still looked down on them and treated them like outcasts, like they were insignificant in the grand scheme and that they could never measure up to what the other more formidable names had. Without the opportunities there to do so this was not going to be possible.

Constance Blevins, the calm, down to earth, wholesome, good natured one of the two began to see changes within her Heavenly Hell partner, and this led to horrible images constantly coming and going in her mind over time. As time went by her relationship with God started to dwindle, and deep down she believed it was because of her relationship strengthening with the 'Gypsy Moth', Minerva. As her relationship with God began to become distant, the images in her head came more and more and they were only getting worse. So Constance finally decided to look beyond her faith and made the hardest decision she would ever have to make when she abandoned it to ensure that her partner, her sister in arms didn't have to face the harsh realities of EAW alone.

Blevins' choice to side with Minerva over her faith is what this team needed, and now with Blevins by her side Heavenly Hell was out to show that they were now capable of anything going forward no matter what was still to come, and doing it together on the same page completely would make them even more dangerous than before as they were more than prepared to teach the ones that looked down on them a lesson in humility they never knew, and they would do it while continuing to rise in the process.

MInerva, an outsider all her life always had her doubts about EAW management or in general in the wrestling business, never a woman to follow rules or a systematic order, so for her to venture with Constance, one that would follow the rules, keeping to her faith was different for the Gypsy Moth. She started to see the positive side of things and maybe Constance was on to something but since Pain For Pride, it was not how they envisioned to no surprise for Minerva who decided that the only approach was the one she had set out when entering the EAW and Empire.All the gorgeous Gypsy needed was for her partner to see things in the same vein. Minerva has reached her boiling point and the ruthlessness that was taught by her father and the deep down desires and thirst for vengeance against those that have disrespected and looked down on her for years….

Has come to an impasse, the question was, would Constance stand by her and against her own faiths. The answer was yes.Constance Blevins has recently discovered a new found aggression that she never believed existed until recently. Now that she's starting to rediscover the spark that made her a rising star early in her career, she has no intention of turning back.

Minerva realizing that the battle cannot be won alone, she found the one woman who everyone has compared her too. She had fought Constance in the past and earned her respect. She wants to win at any costs, even if it means making this truly “unholy” alliance.

Entrance: The lights go out in the arena, a lone spotlight shines on the entranceway as a video package of a woman in the dark sits there twirling a chain, laughing. Suddenly the sound of a lion roars as the video then shows another woman in the shadows clenching her first. “No More” begins to play as “The Gypsy Moth” Minerva comes out slowly, twirling her chain, she drops to her knees as the lights come on and the chorus to “No More” hits, seeing Constance Blevins wearing her newly adorned black cestus gloves with metal spikes, openly embracing the reaction they get as she stands above Minerva looking out into the crowd as they are greeted with a big mix of cheers, a few boos.

Minerva looks up at Constance who nods as the young Gypsy stands up and starts to walk down the aisle with Constance behind, both women look determined and show a sense of purpose. They reach the apron, Minerva slides in and kneels in the middle of the ring taking off her hood while Constance straddles the ropes, she hops on and stands behind Minerva with her arm raised, covered in camera flashes and ready for their opponents.

In-Ring Attires: Include description and/or pictures.

Constance: is average height, very technical in the ring. Her outer beauty, her genuine smile and good natured disposition is equaled only by that of her inner beauty as she loves to bear her soul to those she can trust. She usually wears black strapped top and matching short tights with black gloves (though they are optional: won't always sport them) along with black boots.

Minerva: is slender, athletic and gorgeous. She has a dark, almost goth look to her as she likes to wear mostly black and white clothing. She wears dark makeup, sometimes will go out of her comfort zone, she comes from a family of gypsies and wanderers, so she fits the bill with her long black hair and fair skin. She wears Purple, Green, Red or Black Tights. Short Bikini bottom, Sports Bra type halter top, Elbow Pads, Knee Pads, Shin Guards and boots.


Entrance Attires: [Optional] If your characters wears anything in addition to their in-ring attire, please state so here.

Minerva carries to the ring her “Gypsy Chain” and a hooded black cut off Jacket.


Segment Attires: [Optional] A description and/or pictures of what your characters would wear during on-air segments.

Minerva: Usually wears Jeans, Boots, dresses, stockings, she will wear whatever she feels like for that occasion.

Constance: If needed - when an opponent is trying to gain an unfair advantage.

Minerva: Often, Minerva could care less about the rules.


Motivations: What are your character’s motivations for competing? Delete all options that do not apply:

Other – please specify: Both believe in fighting for their own people and their heritage, and while their respective passions are different they've both shown that it plays an instrumental part in how they operate once the bright lights come on and it's time to perform.


IN-RING INFORMATION
Wrestling Training: Where were the characters trained/by who?

Minerva was trained by her father Jon Goddard who wrestles for the SCW and Rachel Tatum Lee, World Champion Wrestler in UWA and SCW.

Wrestling Debut: When did the team first debut? Terminus (2019)

Strengths: Minimum two (2)
Constance: Her confidence; Her great instincts in the ring allow her to make quick adjustments when in precarious predicaments whether at a vertical base or grounded.

Minerva: She is dangerous, blood thirsty and borderline psychotic in the ring. She uses her beauty and charm to weaken defenses. Minerva also has outstanding speed for her size and is a contortionist, able to escape moves, twist her body to add extra pressure or leverage to her holds and maneuvers. The young prodigy also has a very high pain tolerance and stamina, she can go the distance. Minerva is also a student of the game, always looking to expand her arsenal, chain wrestle if need be and go hardcore if it calls for it, for a rookie, she is well-diverse with a strong will and mentality.

Constance: She has shown at times an inability to take advantage of certain situations in which she has a match all but won; can be over emotional when seeing others she cares for have been hurt and she allows it weigh heavily for a short time.

Minerva: Inexperience, is still considered a rookie with only a year in her belt, she is new to the game and is learning, prone to make rookie mistakes in the ring. Rebellious, she tends to have no regard to the rules or the referees. Minerva can find herself in disqualification situations or put in matches solely based on her antics and disrespect for authority. Size, though she is tall and lanky, she is under 130 pounds and can be overpowered easily.


Promotions: Promotions your team currently is or has been a part of.

Constance honed her craft on the independent scene for eight years as part of (NWL) National Wrestling League, but she never wrestled for any titles regionally or Nationally.

Minerva has wrestled in GCW, EMERGE and WWH. She has yet to win a Championship but did win the Civil War match against 59 other wrestlers.

- 'Double Descent' – Constance\Minerva rebounds off the ropes and spears her opponent, Minerva then climbs up on the top turnbuckle and leaps off while Constance does a standing moonsault and they both land on their opponent in the ring at the same time. (Once again, another combo where both positions of each elitist is interchangeable depending on who’s legal in the match.)

- 'Dastardly Deeds' – A modified neck breaker from a grounded position - Minerva\Constance drops opponent with their midsection crashing against her knee as Constance\Minerva rebounds off the ropes and grabs them by the neck and floats through which sends their head crashing into Minerva\Constance’s knee. (This can work either way with Constance or Minerva going for the cover afterwards depending on who the legal participant is in the match.)

Finishing Moves: Maximum four (4)
- 'No Glory End Of Story' – Constance picks up opponent in the electric chair as Minerva climbs to the second turnbuckle and then leaps off with a modified cutter (modified RKO)

- 'From Heaven To Hell’' – Constance and Minerva deliver a double sitout powerbomb from the top turnbuckle with Constance\Minerva (either or) sitting on top to deliver this move to a helpless opponent.

Minerva came to the EAW as a loner, she came with one goal and that was to bring a unique style not seen in Empire, to humble those that felt self-entitled and privileged by showing another side to the business and her reality. Minerva right off the bat was picked on by Gavin Kirkland, she was called Constance Blevins, another young and exciting wrestler in Empire which the Queen’s Court and others can take blame for forging this tag team. Minerva is super athletic and stamina is one of the strengths she has going for her. She is a contortionist by trade and can when necessary try to use her body to add pressure to holds or even escape them. Now with Constance as her tag team partner, this brings a unique blend of skill, experience, talent and most of all purpose.

Constance is that blend which can in many ways balance Minerva and both compliment their in-ring ability. Constance and Minerva come from two spectrums but their goals and desires have made this alliance for anyone who crosses them…. 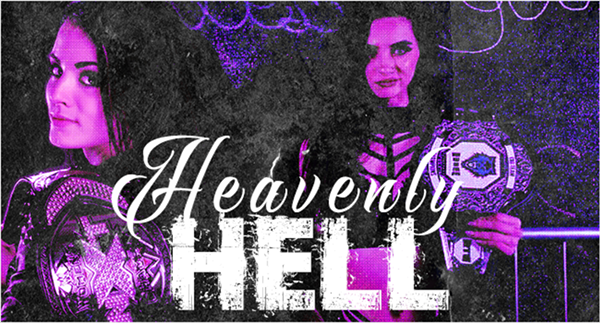