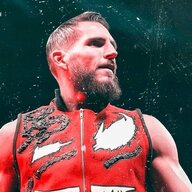 Gimmick (20 words or more): Jack has a lot to prove, not just to EAW, but to himself. After the failed experiment that was the 1%, and being turned on by his own flesh and blood, Jack has no one to count on but himself. Jack is on a mission to show that the 24/7 Battle Royal, and being PURE Champion wasn't just a fluke. Always being known as a great tag team wrestler, Jack is still looking for the break out moment he thought he was going to get last year. With Pain For Pride fast approaching Jack wants to make sure that he's not only taken seriously but looked at as premier talent.

Believe It Or Not! (Shooting Star Press)

Finally got rid of that piece of shit of a partner of yours.
Your singles run is gonna be goat.