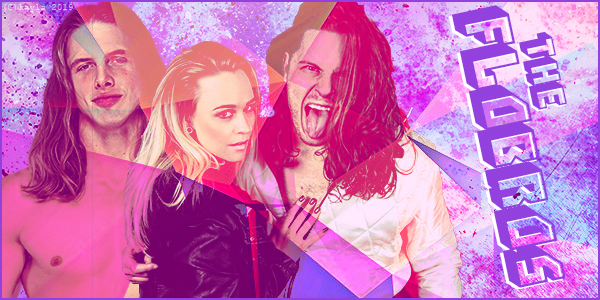 When we last checked on Dynasty’s favorite tag team, the FloBros, they were somewhere in Baltimore having lost to the keys to Crosby Carter’s shitty Pontiac. This is the same Pontiac that had somehow gone missed for two days, or so the Bros claim. They couldn’t remember much of anything about their time in Baltimore except it had apparently been great. They were most definitely a mess, and to further that point, when the two of them had FINALLY decided to search for the missing keys, they had found them sitting inside the car.

On the driver’s seat.

The car was just that WOAT that no one wanted to steal it.

Now the FloBros found themselves heading to Dynasty. They were finally on the road again, en route to Charlotte, North Carolina. Both of them were singing “Old Town Road” badly, and at the top of their lungs. Thadd Blazevich had even gotten his hands on a cowboy hat somewhere. They had the windows down. The wind was blowing. The music was bumping. It was a good ole time.

Because just outside of Greensboro, North Carolina… the Bros ran out of gas.

It was Thursday afternoon, and the Bros were sat on the hood on of Crosby’s Pontiac somewhere on the side of I-85 South. The fact they were parked on the Interstate didn’t seem to bother them all that much. In fact, Crosby and Thadd were glued to their phones, watching the same video.

Thadd was shook over Feral Khan’s words. “Dude, how does he even know that?”

Crosby was equally as shook. “Bruh. When was pro wrestling even created?”

“Probably whenever Mr. DEDEDE decided he wanted to wrestle so I assume like around 1969.”

The Bros laughed hysterically and then stopped. Literally at the same time it dawned on them that the last person they ever needed to mention by name was chairman of the company.

“He’s gunna come back one day and fuck us up for that,” Crosby whispered.

“Carsyn already called Voltage trash and tried to smack Veena. So I think we have it coming anyways.”

“Bring on the death from the Gawd!” Thadd proclaimed dramatically as they both laughed again. The idea of being murdered by the boss didn’t really seem to phase them. Getting their asses kicked was something both of them were pretty good at.

“I’m more afraid of him than I ever will be of the historian, Feral Khan. His whole shtick is that he’s a big dude. Big freaking deal.” Crosby literally rolled his eyes in annoyance. “Like what has a big dude ever accomplished in this business? They all walk around throwing their weight around, claiming to be different. But then they fizzle out man. It’s the time of the little guy. Just look at this company. Noah Reigner weighs less than two hundred pounds, Ahren is just 6 foot and Theron is an inch taller. You look at those guys and you don’t think big and beefy. Noah is a toothpick, Ahren has a dad bod and Theron? Well he looks like some emo tween who can’t stop playing MCR on repeat. But my point is - they’re all smaller dudes in this company and they’re succeeding. Man this ain’t 1800 or whatever. It’s 2019 and in 2019 size doesn’t matter.”

“Is that what you have to tell Carsyn?” Thadd can barely get the line out before laughing. Crosby playfully smacks his friend on the arm.

“Yo. I don’t know what Feral’s talking about, anyway. I’m big where it counts, bro.” And he proceeded to wink at his bestie. Crosby nearly fell off the hood of the car he was laughing so hard.

“But dude, his only other argument was about his endurance. He lifts iron. Big whoop. I was a personal freaking trainer for like years, man. No one spends more time in the gym than me. There’s not a single carb that goes in this body that doesn’t go unchecked.” Thadd was so proud of himself until he looked back and spied the empty bag of Flaming Hot Doritos sitting in the passenger’s seat. “We’re gunna ignore the fact I ate that whole bag. The point is, endurance can only get a dude so far. When you’re in that ring with smaller, quicker, and more agile guys… then all the endurance in the world isn’t going to help you. Not when you’re against two Bros who have literally been built for this. We’ve faced bigger and stronger competitors our whole careers. We know what disadvantages we have inside that ring. That’s why we have both worked so freakin’ hard man. Like so freakin’ hard. There’s nothing this dude can bring to the table that neither of us haven’t seen. We’ve literally come from garbage dumpster wrestling organizations. Dude, we have survived it all because we’re gnarly AF like that. Dude, if we ever make it to Dynasty, I’m getting in that ring with Feral and I’m slapping the shit out of him. I thought Frank was the bozo of the team, but this dude… well he might just take the cake.”

“But Thadd, Feral is bringing athleticism back to EAW! What are you going to do?!” Crosby fake wailed.

“Well, maybe we can start by not giving a ‘long-winded spiel.’” Thadd was proud of himself for that. “Dude might be able to talk, but getting in there is a whole other story. We’re not gunna underestimate him despite the fact we’re having some fun at his expense right now, but serious, bruh. This dude is a weirdo.”

“Totally. He thinks he can bank his career on the fact that he lifted Chudd up last Dynasty. The man is a gawd, but no one has worse cardio than Chudd. Feral has done nothing to show me he can actually hang with the big dogs. I know putting him down won’t be easy, but I also know he’ll have to catch me if he wants to lawn dart me into the ring post. And I don’t see that happening. Honestly, him and Frank are the perfect team. A bunch of fucking weirdo’s who are too serious for their own good. Dude, they’ll fit right in on Dynasty with all the other dramatic emos we’ve got running around. Like the man said, him and Frank both want to win and they both want to win tag titles so they’ve got this in the bag. Excuse me? What? I want a million dollars. Actually, I want some fucking gas right about now.” Crosby closed his eyes, wishing as hard as he possibly could. After a few seconds he opened them and looked around, surprised to see nothing had changed.

“No million dollars? No gas? What the fuck. I thought I could just wish for shit and get it around here. That’s what the rest of this roster seems intent on. It doesn’t matter what they want. You can’t just become a tag team. You can’t just slap two people together and hope for the best. That’s just a disgrace to tag team wrestling. I mean, look at the tag champs. They are the second best set of besties in EAW, next to us, of course.”

“And those babes proved as much when they took the emo kings to town a few weeks ago.”

“Exactly. We’re the premiere team on Dynasty. And two bozos with a size complex aren’t about to roll in and steal our shine. Especially not the week before the freakin’ Grand Rampage.”

Whenever the Bros thought about Grand Rampage, they both got butterflies. Competing in a match like that where you could actually luck your way into a world championship opportunity was something neither of them could truly wrap their heads around. At the end of the day, they were still inexperienced EAW rookies, backyard wrestlers, and deathmatch trash. People like them didn’t get chances like Grand Rampage. They didn’t have the opportunity to go to Pain for Pride and headline it. They certainly weren’t supposed to believe they belonged inside the ring with the absolute best EAW had to offer. It was all still mind-blowing to Thadd and Crosby, and both of them knew to never take a single minute of it for granted. That’s why the two of them remained immune to the hateful words and actions of their peers. That’s why they both stayed true to themselves and to each other.

“Dude, I don’t want to gloss over this week whatsoever because we have to beat Frank and Khan, but I can’t help but think about Grand Rampage. I can’t help but picture both of us in that ring, in that match, living the dream. We could possibly dance with Jamie, with Rexy, with Marr, with Kinkade… with all the favorites going into the match. Dude, Darkane. CHUDD! You know Chudd is gunna be in that match.”

“Landerson. Woogie.” Crosby shook his head. It was honestly overwhelming.

“I know nothing is official yet, but Starr Stan stans his boys. He’s done nothing but give us a chance to do the only thing we were freakin’ put on this universe to do. Bro, I fully believe that the stars are aligning and freaking Mercury is gunna go in retrograde or some freakin’ shit like that before we land in Australia. I know Grand Rampage is going to be huge for both of us. This week is freakin’ huge for us. We knock off FSquared, we cement ourselves. We get to literally freaking say that no other team on Dynasty deserves to compete for those Unified Tag Team Championships but us, man. My Chemical Romance is at the back of the line now, singing ‘I’m Not Okay’ to themselves while Erebus slits his freaking wrists and Darkane shits his pants. It’s us. We are Dynasty’s hope. We are THE team here on Friday nights and man, those dudes Frank and Feral can just get fucked.” Thadd tipped his cowboy hat towards Crosby. “They can seriously just get fucked dude.”

“Deathmatch trash is gonna prevail and David and Goliath are gonna lay down for the one, two, three, bro. We are undefeated as a team on Dynasty and we’re keeping it that way. We’re going to walk into Dynasty bleeding that red pride and we’re going to walk out still undefeated. Starr Stan knows what he sees in us. He knows we’re the freakin’ future man and every week we just go out there and we defy the fuckin’ odds. Fuck anyone that steps in our path and overlooks us. Last week Frank called you a part timer. And for that he’s gonna get a fist right up side the fucking head. Because fuck anyone that questions our drive, our passion or our desire to be here. Man, no one truly knows and appreciates what we’ve got more than we do. We earn every single thing we’ve ever gotten in EAW and that won’t stop now. We’re going to show Feral Khan that his big ass isn’t his strength going into this match. And we’re going to show Frank that this part-timer can make his bitch ass tap out.”

Crosby looked down at his phone and saw the time. He glanced around and saw that not a car was in sight. “Looks like our workout today is gonna be walking to the gas station.”

“Man, I just ate a whole bag of Doritos.”

“What better way to burn it off?”

And with that the Bros slid off the hood of the car and started walking.

Were they going in the direction of a gas station? No one knew.

Would they make it to Dynasty? For the sake of Frank and Feral, we’d say they better hope not.