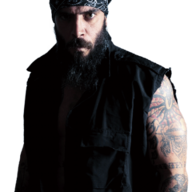 Gimmick:
Zak Simmons was raised in a home that had lots of money, he never wanted for anything but the money was never something that he cared for. At a young age Zak would sneak away to watch cage fights, he was enthralled with the amount of toughness it took for two men to to fight each other and continue to keep going. When Zak became of age to inherited the family equestrian business he wound up selling most of it off except for the main homestead, he used the money to continue his training abroad. Now he is building his legacy in EAW as the greatest fighter in the industry.

Theme Music:
King of the World by Pocelain Black
Special Entrance [Optional]:
The lights go out in the arena, after a pause King of the World by Porcelain Black begins to play. Red and Blue lights start flickering around the arena as The Machine Zak Simmons steps out of the entrance way wearing a black hoodie with a red skull mask on, he pauses at the top of the ramp with the Big Bak Bhampionship around his waste and scans the crowd. After a short pause Simmons starts his way down the ramp and rolls under the bottom rope and walks straight to a corner, leaning against it and folding his arms

What are your character’s motivations for competing?
Simmons wants to be the best fighter in the locker room. Ultimately he wants to leave a legacy of being the greatest champion to ever step foot inside a squared circle.

Least Favorite Match Types [Optional]:
Anything on a pole

Finishing Moves: Maximum three (3) and one (1) optional ultra-finisher (UF)
1. Elite Ending Suplex-
2. The BMF-
UF. Super Elite suplex-
Hes big on striking. He will take every cheap shot he possibly can to get an upper hand on his opponent. He is a brawler so he isnt afraid to bleed if the match needs it
Last edited: Jan 5, 2020
Big Boogie Bhampion 11/10/2019

Welcome to EAW! You’ve been sorted onto Voltage. Please contact your writer @Kassidy Heart if you have any questions or concerns. Good luck and have fun!
Likes: Kassidy Heart