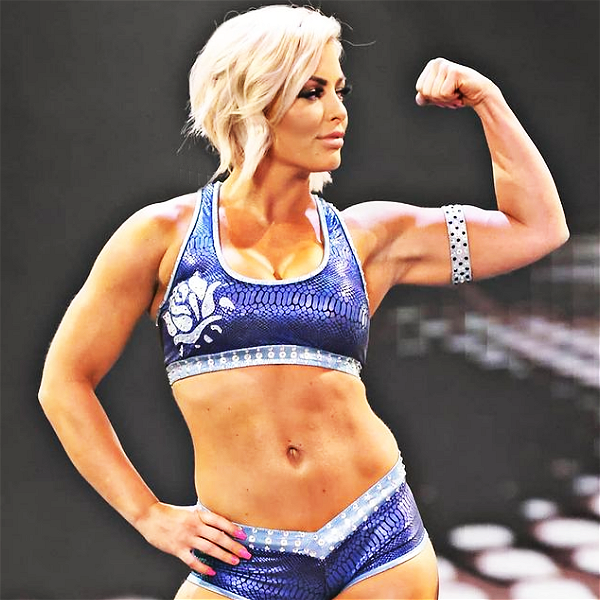 🦋 Disposition/Alignment: Kassidy is a ruthless, cutthroat competitor which resonates with some fans, especially her diehard ones, and completely turns others off. She does things inside the ring that the EAW Universe doesn't necessarily like, but they can't help but watch Kassidy's every mood and more often than not, they find themselves in awe of her. She's chaotic, doesn't see herself as a good guy or a bad guy, and is unapologetic.
🦋 Personality: It might have taken her awhile to get to this point, but Kassidy finally sees herself as someone who is irreplaceable in this industry. Nearly having her career ended at Pain for Pride 13 and being shelved for several months put a lot of things in perspective for Kassidy. She knows her worth (which is more than yours), she knows her value (which is also more than yours), and she's not going to let any person or any situation make her feel less than the absolute best to ever grace the ring. She truly does not give a fuck about anyone or anything besides herself (because she is a queen), her man (because he's sexy and perfect), and her best friend (because sometimes you just realize there are things more important than the National Elite Championship). Building her professional resume and winning absolutely everything is her goal, because Kassidy is poised to become the greatest of all time. The true greatest is not going to be your favorite Elitist. They are not on some other roster, or some unsigned talent. The one and only 'Crown Jewel' of the industry is the woman choosen by Gawd himself to take the throne beside him, and that is Kassidy Heart.


****** Now as documented, Kassidy does have another side to herself. Last season, 'The Mauler' began to appear more frequently during matches and in situations where Kassidy felt like she needed to protect herself. At times, Kassidy found it hard to control this aspect of her personality. 'The Mauler' is something that developed as a defense mechanism due to past trauma and truthfully, Kassidy tried to supress it. She did not necessarily want this to come out, but when push came to shove, Kassidy lost control and 'The Mauler' became a part of her. Thanks to her time off this summer, and with the help of Mr. DEDEDE (the only person with the ability to bring 'The Mauler' to heel), Kassidy has mastered control of 'The Mauler' and its cannibalistic nature, and can now call on it whenever she wants. She can channel the aggression and control the narrative whenever it comes to 'The Mauler', and there is no denying that both sides of Kassidy lust for blood, have a taste for it, and want nothing more than to destroy everyone that steps in their path and tries to stop Kassidy from fulfilling her destiny. Blood is a trigger for 'The Mauler' and it goes without saying that Kassidy won't hesitate to unleash it regardless of who's in the ring with her ******​
🦋 Motivation: Kassidy is motivated by championship gold, fame, fortune, and the goals that have been set for her. As the wife of Mr. DEDEDE, she understands that there are certain expectations that have been placed on her shoulders and she's more than willing to rise to the occassion each and every single time in order to surpass them. Mr. DEDEDE has instilled in Kassidy that it is her destiny to go down in the history books as the greatest of all time. He has taught her to NEVER settle and she knows that complacency, mediocrity, and complaining are things that will not be tolerated in their household. Kassidy has always been driven to prove herself and to win, but she hasn't always believed she's done that despite her incredible career record. Needless to say, she knows that she's a household name and she's more than established herself. Even in her abscence, her name remained on the lips of nearly every other established Elitist. That's power, and Kassidy finds herself more determined than ever to embrace the power she has and to throw it around.


**** There will be some occasions where Kassidy adds a high fashion, couture style mask to her ring attire, including ones that resemble a fashion version of Hannibal Lecter's iconic mask.

🦋 Wrestling Training: Kassidy comes from humble beginnings. She trained under Andrew Wolfe for a number of years at The Plant, which was a shithole of a wrestling school that trainined wrestlers to compete in deathmatches for So-Cal Ultraviolent. However, Andrew was more than that as a wrestler himself and trainer. He taught Kassidy the art of submission and mat wrestling, and taught her how to combine that with the pure brawling and weapon use you see in deathmatches. Currently, Mr. DEDEDE has taken over Kassidy's training. She continues to sharpen her skills and add moves to her arsenal. Mr. DEDEDE's main goal is to fan the fire that burns inside 'The Mauler', keep her hungry and needy for victory, while making sure the stamina, pain tolerance, and strength continues to grow even greater. In essence, he plans to turn her into 'Gawd's Greatest Creation'.
🦋 Wrestling Debut: 2011
🦋 Favorite Weapon(s):
● Kassidy's bare hands and her teeth are her favorite weapons. She will not hesitate to bite her opponents, sink her teeth into an already open wound, or rip at it with her nails and hands. She enjoys the taste of blood.
● After watching Iron Man 2, Kassidy found herself inspired and intrigued by the electric whips Ivan Vanko wielded, and told her Daddygawd she wanted one to play with and use in deathmatches. He obviously obliged, and now Kassidy has her very own electrical whip.
● Kassidy also enjoys using a cattle prod on her opponents. She will sometimes carry it to the ring with her, because you never know when it might come in handy.
● As seen during the 2019 Extreme Elimination Chamber, Kassidy is not afraid to bring 'The Equalizer' to the ring with her. It was popularized by her husband and is a guitar that has barbed wire strings and is filled with thumbtacks, shards of glass, and nails. *** please inquire before using this ***
🦋 Strengths: Kassidy is well trained, technically skilled, and powerful. She can go toe-to-toe with men and women who are bigger and more powerful, and she's got excellent conditioning. She takes her career very seriously and will put in the work to make sure she's a top athlete. Kassidy is also fearless and has a mean streak that is akin to a serial killer.
🦋 Weaknesses: Kassidy's stubborness and ego has the potential to get in her way more so than anything else. She is so prideful that she would rather pass out, than tap out if she ever finds herself in that situation.
🦋 Tendency to Cheat: Kassidy will not outright cheat to win a match, but due to her overly aggressive and slightly psychotic nature, she will not hesitate to intimidate the officials into letting her bend the rules a bit. This benefits her opponents, who will also get to be more aggressive in the match. Kassidy will always win or lose a match based on her own merit. She doesn't take shortcuts to win because she is not a coward. She just likes inflict pain and feel it.

🦋 Signature Moves:
● ‘Rapture' (helluva kick)
● ‘DEDEDE DDT' (stolen from Ronn Bank$ because DEDEDE is Kassidy's zaddy)
● 'The Kassploder Plex' (two or three german suplexes in a row)
● ‘CHANEL N°5’ (clubbing blow to the back of the head, following by a straitjacket german suplex; can be used to finish a match against a lesser opponent)
● 'Norvina Lights' (spiked hurricanrana; purposely driving her opponents head into the mat. [can be hit in any situation])
● ‘Painfully Ever After’ (curb stomp to any part of the body; used as a back up finisher if needed)
● 'HelloFresh' (snap buckle bomb)

🦋 Finishing Moves:
● 'Gawd's Gift' (avalance cross armbreaker; once kassidy gets the arm straightened, she will bite down on her opponent's fingers to make them quit quicker)

(for writers)
💜 Having suffered multiple concussions during her short time in EAW, Kassidy knows that her days inside the ring are numbered. She competes every match like it’s her last match, because it very well could be. She’s never been a cautious individual and competes a little recklessly, and she’s very ruthless. Her sheer will to win and to be successful is unmatched, and she gives every single match literally everything she has inside of her. She leaves it all out there.
💜 Kassidy isn’t in the ring just to take punishment. She’s a highly skilled, very technical wrestler and can hold her own against anyone. She can out wrestle anyone, and she will always perform at the highest level. She has worked hard on building muscle and is stronger than she's ever been, and that will help her competing against bigger opponents.
💜 Kassidy would NEVER tap out during a match or for any other reason. She would have to pass out or have to be knocked out before she would ever submit to another person or quit. Kassidy doesn’t care about getting injured, having competed with more injuries than she can even remember.
💜 She would also NEVER cheat. Kassidy has taken shortcuts in the past, but at the beginning of 2019, she made a promise to herself that she would win or lose every match going forward on her own merit.
💜 As seen at Pain for Pride XII, Kassidy's ability to absorb punishment might be one of her biggest weapons. She thrives in extreme, ultraviolent situations and loves to spill blood... hers and her opponents. She has the ability to tap into 'The Mauler' whenever she wants, and that side of her personality is absolutely devastating.
Last edited by a moderator: Oct 3, 2021

Location
The City of Angels

#7
Greatest Pic Base Of ALL TIME!!!! Welcome !!
Likes: Kassidy Heart

Ryan Savage said:
Greatest Pic Base Of ALL TIME!!!! Welcome !!
Click to expand...
I am definitely loving her right now!

Best pic base in the fed for sure. Absolutely adore Mandy right now.

Made some small updates since we’ve merged, and Kassidy has definitely evolved into something much more than what she started as lol.

Updated theme song (thanks Carmella) and added a new finisher to be used in the future.

updated personality, achievements, some other little things here and there, and added hearts because of course ♥♥♥

Added some new common moves and a new signature move

Added a new theme song. Credit to the King of Woats @Theron Nikolas for his help, guess he’s good for something ☺️😀

Damn, how'd you think of all of those new flashy moves?