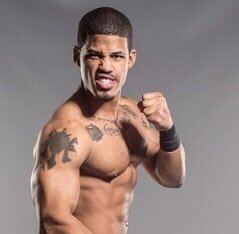 Gimmick: A technology fanatic and a nerd for numbers, Damian loves to try and break down his opponents via analytics, trying to find tendencies to exploit to make up for not being the biggest, fastest, or the most athletic person around. When given the opportunity, Butler likes to incorporate his high level tech in matches whether that's to entertain the fans, playfully mess with his opponents, or to try and gain an advantage when backed into a corner [see "Tendency to Cheat"]. Because he was homeschooled since a young childhood, he is socially awkward around his peers outside of the ring. He feels more comfortable around his holograms and creations that he made to hang out with him.


RINGSIDE INFORMATION
Theme Music: “The Next Movement” by The Roots


Entrance: As the music begins, the lights dim down and an alternating red and blue spotlight flickers on the stage. A few seconds later, Damian Butler emerges from the back curtain dressed in a traditional boxer’s robe with “DB3” in big italicized letters on the back, arms raised with a confident smile for the crowd.

As he makes his way down the ramp, he presses some buttons on his wristband. Within the next few seconds, a holographic wave of confetti begins to trickle down, seemingly from out of nowhere. The crowd applauds the trick while some in the first row try to catch the nonexistent pieces of paper. Butler soaks in the cheers from the fans as he stops just before the ring apron to press some more buttons, causing the confetti to fade away.

He rolls into the ring, racing to the nearest turnbuckle and climbs it, letting off a loud, boisterous yell to hype himself for his upcoming opponent. [If his opponent is in the ring already] He turns his head slowly towards [insert opponent here] before hopping down to the mat and disrobing, handing his clothing to the official. He smiles one last time before cracking his neck twice and backing his way towards his corner, never taking his eyes off of him/her. [If his opponent isn’t in the ring yet] He disrobes himself, tossing his gear in the direction of the official, waving his arms to try and get the crowd excited one more time before hoping down. He does some final stretches as he waits patiently for his opponent to make their way down.

Special Entrance : To Be Announced…

Damian has always wanted to be a famous professional wrestler since he was a young child. He was never the biggest, strongest, or most athletic. But, he did have brains and he wants to prove to the wrestling world that the future of wrestling lies within one’s mind.

Tendency to Cheat: If Needed (He’ll deploy a realistic hologram of himself to distract his opponents while he catches his breath and come up with a new gameplan or use the holograms to confuse his adversary into thinking which one is the real Damian.)

Favorite Match Types: Ironman match. The longer the match goes, the more Damian can learn his opponent’s tendencies in the ring and use them to his advantage.

Least Favorite Match Types: Hardcore matches. Has witnessed the change people have gone through when a weapon is introduced into a match. Makes the opponent more unpredictable which renders the analytic data he found useless.

In-Ring Achievements: To Be Determined…

2.The Motherboard (The Bitter End)

BIO
Damian Butler the Third was born in 1999 the son of an electrical engineer for a father and a mother who was an athlete and an honor student of her own at the University of Delaware. The family packed up and moved coasts en route to Silicon Valley during the internet bubble and found great success in a variety of fields and projects. As time moved on and the technology advanced, Damian grew up and became fascinated with the latest and most innovative pieces of futuristic equipment. During a show and tell portion of a class in his 2nd grade year, he went to show off a device to his classmates that went completely and terribly wrong. Butler was so embarrassed and distraught that he ran out of the school and cried that whole night, leading to his parents to take him out of school and home school him for the rest of his educational days. While being home schooled, he developed an interest for professional wrestling and would often try to copy some of his favorite wrestlers that he saw on TV. When he hit the age of 18, he began to train with some of the robots his father invented whenever he had time between studies and family outings. Wanting to gain fame on his own merits, Damian took to looking for wrestling companies that would sign him. Hopefully, EAW would be the break he was hoping for.
Likes: SKA, Ryan Wilson, Justin Windgate and 2 others

Welcome to EAW, the character looks really interesting I look forward to seeing what you do with it. You'll be sorted onto Voltage where the next card goes up on either late Sunday or early next Monday and you'll find yourself on it. Please contact your writer @Kassidy Heart if you have any questions or concerns.

Thank you very much! Looking forward to some big fun here in EAW

Credit to Jake Smith for the Sig​