MATCH PROMO "It Is Time Cleopatra That I Make You Finally..... FADE TO BLACK" CLASH OF KINGDOM II RP4

No One but New Eden

“Chimerical and empty being, your name alone has caused more blood to flow on the face of the earth than any political war ever will. Return to the nothingness from which the mad hope and ridiculous fright of men dared call you forth to their misfortune. You only appeared as a torment for the human race. What crimes would have been spared the world, if they had choked the first imbecile who thought of speaking of you.”

As the moment approaches when Minerva will face Cleopatra and defend her National Elite Championship for only her second time since winning it at Pain for Pride against one of the best in TLA, successfully defending it already once against Chris Elite at Bloodsport, the Gorgeous Gypsy understands the importance of not only this match but the defense as well. What she sees is a charlatan trying to ease her way into the title picture and jumping right in front of everyone, but this is why Minerva wanted to put the title on the line, it wasn’t a match for the National Elite Championship… ​
It was a point to be made and a message to be sent to the entire roster of the EAW.​
Minerva though is a woman that doesn’t take to kindly to being besmirched, her name and character defamed in anyway, for she has always been who she was, no matter what but Cleopatra on the other hand has been a very selfish woman who tried to hold Minerva down from succeeding, the proof was always there, Cleopatra is just trying to hide it. This practice had become infuriating to Minerva who had been watching her every move, the latest stunt was Cleopatra visiting with a parent and her daughter, a young woman that emulated what Minerva stood for, rebellious, different, going against the grain, and all she was doing is being told that she couldn’t explore her individuality. Whether it was bad or not was a different story, but the things that she told this young woman….​
… well for Minerva that was out of line.​
She believed in New Eden, everything they stood for, what their goals were, it didn’t matter what it was. Minerva though had been sitting in her hotel room getting dressed, sitting on the couch slipping her feet in socks and then boots, Cleopatra was on TV talking to the mother and young girl after footage was shown of her arrival, the parade being thrown, people on the streets cheering this old cunt in her thoughts. Minerva’s icy blue eyes were fixated on the TV, hearing Cleopatra say these things about her, digging her nails into the palms of her hand, the long, sharp ones that were ready to gouge the yes out of this woman who took any chance to kick her down much as she could.

Minerva was not having it.​
As she was getting ready for a media scrum and session to promote Clash of Kingdoms II: Shores of Gold, she stopped and tilted her head, glaring at the television, listening to this….​
“It’s such a shame that Minerva has corrupted people with good morals.”​
A small little chuckle escaped the Gypsy’s mouth, trying to tell this little girl about Minerva when she knew nothing about her other than what she had seen so long ago. The beautiful Black Rose wasn’t going to have any part of it, standing up and pacing, listening to this garbage the entire time, the hypocrisy behind it all, it had to be staged.​
“This is a fucking joke, right?”, Minerva squealed from her lips, running her fingers through the long strands of orange hair. This seemed like a nightmare, on worldwide tv, this would be on YouTube soon, and all Minerva could do was laugh, yet sneer for she knew the importance of what this could do to her reputation here. As the footage came to a close, Minerva grabbed her jacket and stormed out….​
… ready to meet Drake King and Myles so they could get this obligated EAW stuff over with, if they even show up.​

One Hour Later
(On Camera)​

“Well.. no but…” ​
“No, shut up and listen to me and the rest of you watching out there. This is what you all wish but will not happen. Instead, after I defeat her, dropping Cleopatra on her head and walk away as the Champion that has taken this company by storm the last three years, I will make what happened then look like a camel ride through the desert. Pay close attention to Clash of Kingdom’s and Nadia? Don’t listen to that worthless, liar. What you are doing is just fine, be who you are, and do not allow anyone to tell you different. As for you Fayrah? This interview is over.”, Minerva speaks in vitriol, but Fayrah tries to get one more word in…. ​
But Minerva grabs her by the collar, the tv studio hands rush to Fayrah as Minerva smiles….​
“Here’s a message you can give your Queen.” ​
Minerva suddenly SPITS THE DARK IN FAYRAH’S FACE AS SHE GOES DOWN SCREAMING. Minerva turns to the others as they are backing up. She starts to laugh with black goo dripping from her mouth as Fayrah is on the floor rolling around yelling for help. ​
“That wasn’t soda.”​
Starting to cackle, Minerva holds grabs the championship, steps over her and heads off camera when the personnel rush to her aid as all you can hear is the laughter of Minerva.​
​
SCENE FADES​
​

​
IT IS TIME CLEOPATRA THAT I MAKE YOU FINALLY….
FADE TO BLACK
CHAPTER FOUR​

With a huge match for the National Elite Championship happening tomorrow, Minerva better known as The Black Rose of the EAW is prepared to do whatever it takes to walk out still as champion and not fall to someone like Cleopatra who is a legend, Hall of Famer and most importantly a pioneer in the women’s division, but the first woman to ever step in front of Minerva and test her as a young rookie in the EAW, pushing her limits, doing everything she could to survive in a dog eat dog world within the Empire Brand. Minerva didn’t know what she was in for, how it would turn out, wandering in the business after a terrible first experience elsewhere but not lost. She searched for a way, a path to success and the EAW sought her out, they were looking for talented women to join the roster and really make the Empire Brand work, but after only a season, it all became about Showdown, Voltage and Dynasty. ​
Cleopatra was already gone.​
By then they had the war everyone still talked about today. With others involved in Amber Keys with Cleopatra and her Queen’s Court, where on the other side it was Heavenly Hell, Minerva and Constance Blevins. Their fights were always a topic of conversation and when the tag titles came to the two raven haired beauties, it was the start of something special for Minerva. This was the pivotal moment when she started really making a name for herself, the Queen’s Court was the launch pad, but now in 2021, Cleopatra has returned, for many reasons, but the most important, to defeat Minerva and get the title from her, which the Gypsy will die before she ever does this. Minerva’s career so far has been quite the ride, there have been times she has flown with the eagles and crawled with the snakes, but Minerva always finds a way to get back on the saddle and do whatever she can to persevere, and this situation is no different. Minerva will always be labeled the villain here, due to her association with New Eden, but what Cleopatra has never taken into account, it is not New Eden she is facing, Drake King defends his EAW World Championship, Myles takes on Mr. DEDEDE, New Eden will be nowhere around this match as Minerva wants to prove once and for all who the superior athlete really is. ​
And she plans to massacre the legend of Cleopatra.​
Outside the Grand Mosque of Kuwait, the Gorgeous Gypsy wears while covered up some in black vinyl pants, platform boots, a black and orange halter top and matching black jacket. Her long orange hair hung down; nails polished a matte black, wearing orange lensed sunglasses, this time carrying a black rose in her hands. The National Elite Championship over her shoulder, staring at the Mosque behind her as the camera starts to record…​

REC:
​
After taking in a deep breath, Minerva speaks in her calm yet eerie tone…​ 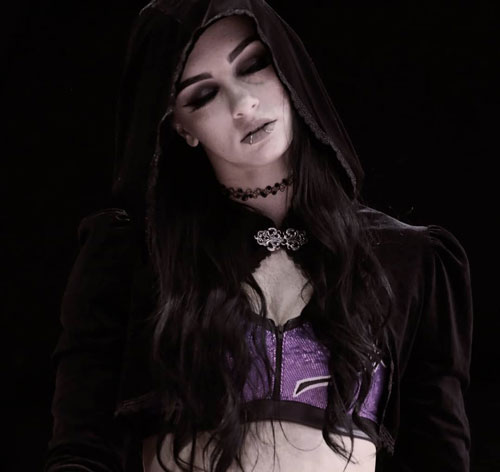 That’s right, that was me in 2019, and all you could do is laugh. I tried once to be like you, Cleopatra. My mother wanted me to be a Princess, to be beautiful and royal, demand attention and respect, be what you were, be a demarcate of the norm, stand out. At 14 I was beautified, made into this gorgeous young woman, made to believe this was going to be me….​ 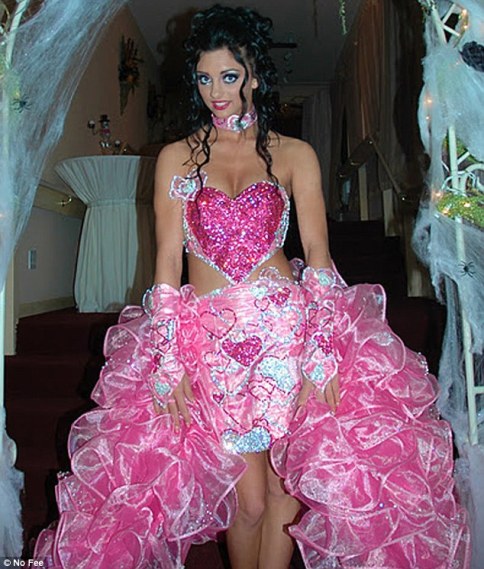 ​
… but was that how I continued to perceive myself? No, we saw the end result, I became a Princess Killer instead, tomorrow night, a Queen Slayer, and I will never transform into a shallow, frothy and trivial cunt like yourself who has to step on others to make herself look strong and powerful. This was not me, it was my mother's vision, but mine was a lot darker. For years you tried to hold back every woman that threatened you in any type of hype, still today you cannot let go of what happened between us. Whatever homecoming or welcome you get here in Kuwait City, Cleopatra, they can roll out the Queen’s Bountiful Harvest and make you feel like royalty, serve you hand and foot, but remember one thing….​
… the real never need to prove it to the phonies.​
By the way, “Gypsy Moth” is now considered to be a racist remark, it’s “The Black Rose” now, keep up. Cleopatra, that little girl, who looks up to Minerva and every other weirdo and eccentric souls that looks up to me as the voice to their silence, we cannot be stopped. Whether this is about a future with New Eden in control, your take on me will forever be false, wrong for when this THIRD WHEEL, this backseat driver, this woman you claimed who allowed for everyone else to pass me by, just remember one thing, you can take my breath or my heart away all you want, I lost that a long time ago….​
…. But I am going to take this heritage, this Cleopatra tradition, and bury it in the sands of Kuwait once and for all…​
…. With the live Excerebration of Cleopatra as we Fade to Black.”​

Tilting her head, Minerva slowly licks her lips before raising her National Elite Championship, lowering her sunglasses, icy blue eyes glaring and narrowing with disdain as she sneers…​

“When MY Heaven Becomes YOUR Hell.”​

Leaning her head back, Minerva then mutters in Romanian….
​
“Nimeni în afară de Noul Eden.”
​
As she starts to laugh, her eyes widening before stopping suddenly and cracking a wicked smile.​
​
*STATIC*​
/REC