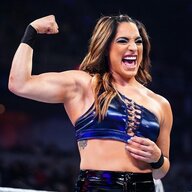 CHARACTER INFORMATION
Disposition/Alignment: Choose from these options:
Pure Babyface | Face | Anti-Hero | Tweener | Cowardly Heel | Ruthless Heel | Monster Heel
Gimmick: ‘La Diosa’ Ximena Velasquez has arrived to Elite Answers Wrestling. Ximena’s goal is to dominate the wrestling scene as she believes she is the next big thing in professional wrestling. Ximena’s physical profile has made her into an intimidating figure - standing at 6ft tall she has beaten opponents without breaking a sweat. Ximena is 180 lbs of pure muscle and has overpowered others with ease, regardless of gender. Ximena comes across as cocky, straight-forward, and as someone who has no time for games. Ximena’s ancestral roots motivate her to achieve her career goals. She relies on the guidance and support of her Mexican American community to represent her people on mainstream media. XV is hungry and ready for a seat at the table.

MOTIVATIONS
What are your character’s motivations for competing?

Ximena wants to represent her people in the wrestling industry. She’s tired of seeing fellow Hispanic wrestlers sitting in catering while others bask in glory. She’s not just doing this for herself, she’s doing this for HER people… And she doesn’t care who she has to destroy to fulfill her own prophecy. Hello, welcome to EAW! You will be sorted onto Friday Night Dynasty! The deadline for each show is the night before at 11:59 PM EST. If you have any questions or concerns, feel free to contact any board member. If you haven't joined the Discord yet, feel free to do so! Have fun and good luck!
Toggle signature