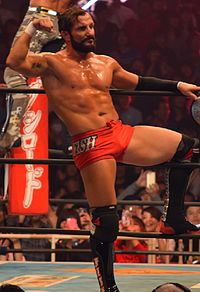 CHARACTER INFORMATION
Disposition/Alignment: Anti Hero
Gimmick: InFamous Hunter {Lucas is an anti hero who despises how Faces and Babyfaces operate so he targets everybody who is just like that. Sometimes he targets other people who are way too cocky for his own comfort, he is a quick striker who uses fast and lethal attacks to takeout his opponent as swiftly as possible, once he secures the victory, he often attacks his opponent post match but if he has respect for his opponent, then he'll offer a handshake. At rare times where he sees someone as a legitament threat or someone who he believes he cannot beat, he will attack them before the match.}

MOTIVATIONS
What are your character’s motivations for competing: To show everyone what he's truly made of, to show people he is here, to show people why he should be feared.
Tendency to Cheat: If Needed | Sometimes

Hello, welcome to EAW! You will be sorted onto Saturday Night Showdown! The deadline for each show is the night before at 11:59 PM EST. If you have any questions or concerns, feel free to contact @Jamie O'Hara. If you haven't joined the Discord yet, feel free to do so! Have fun and good luck!